Government must act decisively and create a permanent parking site for handling queues of lorries when there is disruption crossing the channel, the RHA said this week. The call comes as this weekend saw lorries continuing to queue on the M20 an… HM Revenue and Customs said problems with its goods vehicle movement service (GVMS) in Dover had been fixed and it expected business as usual from Monday (11 April). This week, HGVs were forced to queue on the M20 and A20 into the port town as d… Lorries are continuing to queue on the M20 and A20 into Dover today (5 April) as disruption to traffic crossing the Channel enters its fifth day. Hauliers have faced severe delays getting in and out of Dover since last week, as a result of a lac… Lorry drivers may have to get used to queueing for four hours at Dover on busy days in the UK’s post-Brexit world but the overall picture is positive, a haulage industry boss says.Miles-long queues of HGVs waiting to get into the crucial trade port hav…

‘It is soul-destroying’: lorry drivers face hours stuck in queues at Dover As Dover breathes, truck traffic rises and falls – but don’t go on Tuesday

The Dover TAP on the A20 in operation today with truckers queueing to board ferries. Credit Nick Savvides. A leading UK freight lobby group has urged the British and French governments to hold talks to ease miles-long backups at Channel ports that have been blamed on Brexit.
Trucks have faced queues of up to six miles (10 kilometres) this month on the appro… The huge queues at Dover can be seen on Google maps. Picture: Alamy/LBC

Calls for Brexit minister to visit village blighted by lorries

There are calls for the new Brexit minister Liz Truss to visit a village near Ashford[1] where truckers keep getting lost on their way to a lorry park.
Since the 66-acre Sevington Inland Border Facility (IBF) opened almost a year ago, countless HGV dri…

Rail, ferry and Eurotunnel passengers travelling between the UK and France could face chaos next year when the EU’s long-planned Entry/Exit System (EES) is implemented.Transport chiefs told peers on the House of Lords Justice and Home Affairs…

Crews wearing breathing apparatus used hose reel jets and compressed air foam to tackle the fire in both the cab and trailer of the lorry.

The Technical Rescue team also attended the incident and used a telehandler to remove the load from the trailer to access the deep seat of the fire.

A casualty was left in the care of SECAmb suffering the effects of smoke inhalation.

A lorry fire that has closed part of the A20 is sending plumes of black smoke billowing into the air above the Kent coast.

Traffic is being held on the west-bound carriageway near Dover[1] while emergency services deal with the blaze, with the fumes visible for miles around.

Firefighters are using compressed air foam to battle the fire, which is affecting one large lorry.

Two fire engines are currently at the scene, but it is believed more could be on the way.

The road is blocked from Old Folkestone Road (Western Heights roundabout) to the B2011 (Court Wood Interchange).

More as we get it.

Avoid getting stuck on Kent’s roads by keeping up-to-date on all of the latest traffic and travel news here[2] or by following our live blog[3].

Read more: All the latest news from Dover[4]

Police appeared to outnumber protesters as an anti-immigration march[1] is held in Dover[2].

People began assembling at 1pm at Union Street – away from the town’s train station where police vans and cars were waiting.

Officers wearing riot gear, many drafted in from outside the county, gathered at the station as a start point had not been released.

However the bulk of the protesters, of which there were a few dozen, soon started making their presence known.

Red flares were set off as the march moved onto the A20 Snargate Street where the group remains.

Protesters have blocked off the road for at least an hour, standing or sitting in the middle of the road.

They remain there with police setting up a rolling roadblock around the group.

An eyewitness has suggested two people have been arrested for obstructing the flow of traffic, with one man almost being hit by a lorry.

The witness said: “On the whole the protest has been largely peaceful with a couple of tense moments.

“A woman was picked up off the ground by officers but wasn’t arrested. A man who appeared to be a military veteran started shouting at the police and was softly pushed back – again it wasn’t anything too serious.”

Another man is being treated by paramedics after collapsing in the street, thought to have been from heat exhaustion.

The ‘Defend our borders’ march was advertised in advance by a group calling itself the Pembrokeshire Patriots.

Its name stems from the use of a Welsh barracks – similar to Folkestone’s[3] Napier Barracks – to house people caught crossing the Channel.

The group refuses to be labelled as far right.

More information as we get it.

Read more: All the latest news from Dover[4]

‘Fix it, open it and then leave us all in peace’

It’s the news no driver wants to hear – once again parts of the busy M20 are to be closed to allow roadworks to take place.

Highways England will be carrying out yet more work of the road through Maidstone[1] and Malling[2] during the summer, with some full overnight closures planned between junctions 4 and 6.

Workers are expected to be on site from June 7 to resurface the carriageway, refresh line markings and replace road studs.

The work is expected to take place run until August 27.

Most of the work will be facilitated by lane closures between 8pm and 6pm.

However, there will be some overnight carriageway closures, with the road shut eastbound on July 12-15 and westbound on August 23-26. 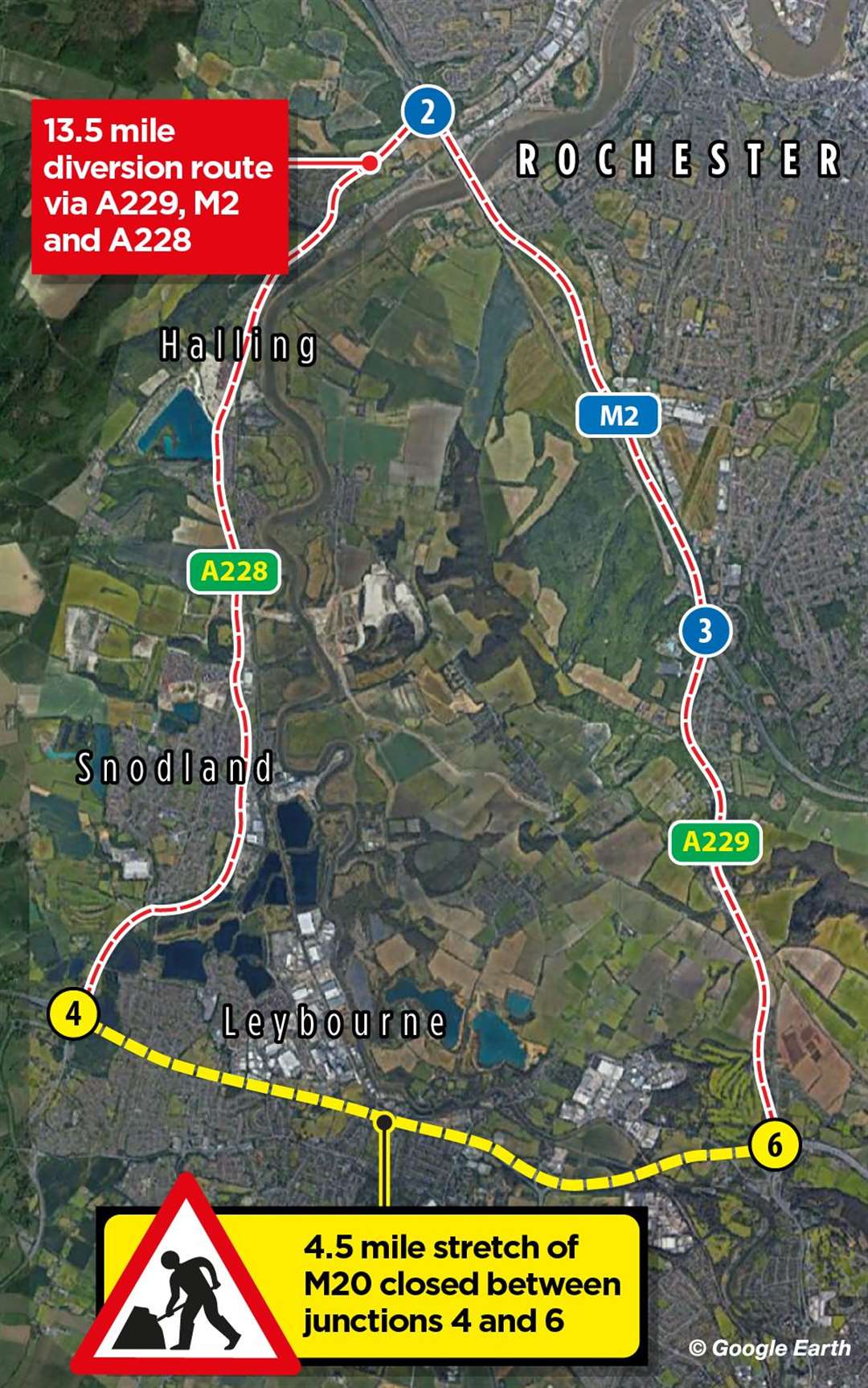 The news of the latest scheme has been met with exasperation by Chatham and Aylesford MP Tracey Crouch, who has previously hit out at what see described as “shambolic” management of projects on the motorway which runs through her constituency.

“These night-time road closures are utterly ridiculous given how much disruption residents along the M20 and A20 have already faced,” she said.

“I wish they would just shut it, fix it, open it and then leave us all in peace.”

Roadworks on the M20 have been a common sight in recent years, particularly in the section between junctions 3 and 5 where two years of work was carried out to convert a 6.5-mile stretch into a smart motorway.

That work finished in May last year, but by the summer workmen were back – this time to replace a footbridge which collapsed when it was hit by a lorry in August 2016[3].

Speaking at the time, Ms Crouch said: “It has been a shambolically managed project from the outset and requests to combine works to minimise disruption have been ignored.

“Unfortunately Highways England appear to do whatever it likes, when it likes, with little accountability, something that needs to be addressed for future road build projects.”

Avoid getting stuck on Kent’s roads by keeping up-to-date on all of the latest traffic and travel news here[4] or by following our live blog[5].

Read more: All the latest news from Maidstone[6]

Read more: All the latest news from Malling[7]