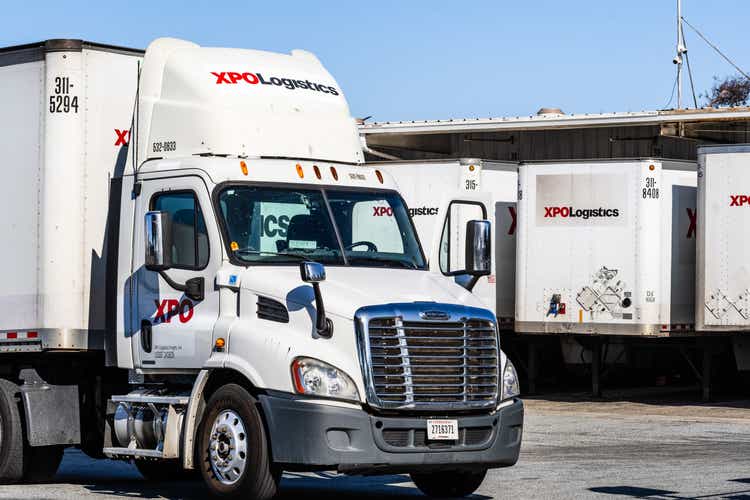 I've followed XPO Logistics (NYSE:XPO) for many years because it's a major trucking company and because management is working on an impressive business transformation. The company is more than just a trucking company as it has become a technology-driven transportation leader fueled by acquired growth and in-house improvements that have generated tremendous long-term shareholder value including a spin-off in 2021 (GXO Logistics (GXO)). In today's article, we will discuss the company's improvements.

It just had its best second quarter ever and it announced a change in leadership following the upcoming brokerage spin-off in 4Q22, which will be called RXO. While economic headwinds remain, I remain extremely bullish on XPO's future as the company remains way too cheap for many reasons that we'll discuss in this article.

So, bear with me!

A Quick Look Back

On May 25, I wrote an article titled "XPO Logistics Stock: I'm Even More Bullish Now". Since then, the stock is up 24%.

Essentially, I was bullish because investors had priced in so much potential weakness that the risk/reward seemed extremely attractive.

Back in May, the stock was on its way to dropping almost 50% from its all-time high.

While XPO has a volatile history including steep drawdowns, that was just too much.

Especially because the company is improving its own business so much. Back then, I wrote:

Unlike a lot of poor-quality stocks that are currently suffering, XPO has a tremendous business behind the stock price. Free cash flow has accelerated, debt has become more than sustainable, and spin-off plans are about to unlock a lot more value - both in terms of operating efficiencies, and in terms of stock market valuations.

Improving its business is exactly what XPO has been doing in 2Q22.

This £7.0 billion market cap trucking company did £3.23 billion in revenue.

That's an improvement of 1.3% versus 2Q21 and £40 million higher than the consensus analyst estimate.

Adjusted for the sale which is part of the business transformation and pending spin-off, sales growth was 11%, which is truly impressive given deteriorating market fundamentals. In June, for example, I highlighted the fact that pricing in shipping had come under pressure (see the graph below).

That didn't impact XPO as it saw strength across the board.

For example, adjusted EBITDA made it to £405 million, the best second-quarter result in its history and a 23% improvement versus the prior-year quarter. It also marked the eighth straight quarter the company delivered a quarterly record for adjusted EBITDA.

Before we continue, please be aware that LTL stands for less-than-truckload. It's shorter-distance shipping, which more often than not covers shipments between 150 and 15,000 pounds.

Unlike FTL (full-truckload) shipping, it tends to be an industry with better access to employment given the more favorable conditions for drivers.

Anyway, XPO hit it out of the park in 2Q22. The company reported record revenue and EBITDA (for any quarter in its history). The company achieved an 80.4% operating ratio, which is a tremendous improvement.

Bear in mind that the operating ratio measures how much it costs to run operations - as a percentage of revenue. The lower, the better. In this case, 80% is roughly 10 full points below a lot of peers - especially companies who focus on full truckload shipments.

With regard to labor, in June, the company hired the largest number of new net drivers in a single month since July 2021.

Moreover, XPO aims to generate at least £1.0 billion in LTL adjusted EBITDA in 2022.

That's almost twice what the entire company did in adjusted EBITDA in 2015, and that includes the spun-off GXO business.

In 4Q22, when the brokerage segment will be spun off, Mario Harik will become CEO of XPO. He is currently CIO and acting LTL president. Founder Brad Jacobs will become executive chairman.

Mario was one of the first employees that founder Jacobs hired when he founded XPO in 2011 - less than 12 years ago.

Mario has been part of XPO's vision to become a technology-enabled leader in the industry and he has been part of every single part of the business transformation including a better operating ratio, and network fluidity when it mattered most, as well as customer satisfaction and employee engagement.

In its truck brokerage segment, the company saw a 16% higher load count. The seventh-consecutive quarter of double-digit growth in volumes. It boosted revenue by 23% with an EBITDA margin of 10.6%.

The first quarter with a double-digit EBITDA margin.

One of the main reasons why XPO did so well in brokerage despite pressure on container volumes due to economic growth slowing and related inventory de-stocking is its technology platform.

In 2Q, the number of loads created or covered digitally rose by 80%. That's up from 74% in the first quarter.

It helped the company to raise full-year guidance despite economic weakness. The company is now looking to do between £1.40 and £1.43 billion in adjusted EBITDA, including the gain on sales of real estate and the aforementioned goal to do at least £1.0 billion in LTL EBITDA. The operating ratio is expected to improve by more than 100 basis points in North American LTL.

Free cash flow is expected to be at least £425 to £475 million, excluding all transaction-related impacts.

Total available liquidity is £1.4 billion. This includes the intermodal sale and it lowers the leverage ratio from 2.7x in 2021, which is remarkable and a step in the right direction as past acquisitions and investments had caused the leverage ratio to rise. Now, free cash flow is reversing that, which is great news for all parties involved.

With that said, the brokerage business won't be part of XPO anymore in 2023 as the spin-off has been announced for 4Q22.

The spin-off company will be called RXO as briefly mentioned in this article.

RXO will cover XPO's brokerage business and become the fourth-largest US truck broker.

Brokerage is a great place to be as it is a flexible, asset-light business with high returns on capital designed to use secular growth for growth in all stages of the business cycle.

A truck broker, also known as a freight broker, is the middle man. He's in an agreement between a shipper who has goods to transport and a carrier who has the ability to move the load. While many shippers in the United States have direct contracts with trucking companies to transport their goods, using a freight broker can give shippers more flexibility.

This can also help their shipments and help them save money. Truck brokers don't have their own trucks and drivers.

As discussed in the first half of this article, XPO's brokerage is a huge success. Growth rates are impressive and adoption of its platform is going smoothly.

RXO/XPO currently has a 4% market share in what is estimated to be an £88 billion market.

If the company is able to execute, I have no doubt that outperforming growth will last.

Moreover, it's not just that RXO/XPO is benefiting from outperforming growth in a large industry. The industry itself is growing rapidly. In 2021, the broker penetration of the US truckload industry was 22%.

RXO started much smaller with revenue of less than £400 million, but outperforming growth is impressive nonetheless - and it's expected to last.

Moreover, and with regard to its digital platform, the company had roughly 1,000 registered customer users in 1Q19. In 2Q22, that number made it to almost 13,000.

With that said, 80% of the spin-off will include brokerage.

The remaining 20% will consist of:

In my last article, I called XPO "criminally" undervalued.

Despite its rally, the company is still way too cheap. In this case, I'm looking at XPO as a stand-alone company without the RXO spin-off. We're dealing with a £7.0 billion market cap, £2.2 billion in expected 2023 net debt (again, ignoring the spin-off), and £120 million in pension-related liabilities.

This puts the enterprise value at £9.3 billion.

6.7x isn't far off. It's still very attractive and it comes with one major benefit from shareholders, which is the spin-off. There is no way the market is going to value RXO at 6.7x EBITDA.

I believe the valuation will be closer to 14x EBITDA given the expected growth rates of that businesses. Moreover, the stand-alone LTL business (what will remain XPO) shouldn't be valued at less than 10x EBITDA either, in my honest opinion.

So far, I've often mentioned that the current XPO business should trade at no less than 11x EBITDA, which would imply a £13.1 billion market cap, or close to 90% upside.

We're not getting that kind of rally this year, but it's my longer-term target. Or to put it differently, I think that's what the (current) company is worth - at least.

XPO does what it does best: generating shareholder value.

The company had a tremendous quarter despite economic headwinds. XPO benefited from secular growth and its own ability to withstand supply chain and labor issues. It accelerated growth in LTL and brokerage customers, improved network fluidity, enhanced margins when it mattered most, and revealed more details regarding the pending RXO spin-off.

The company's fair value is much higher. I expect the company to remain in a volatile long-term uptrend, which will benefit tremendously from the RXO spin-off as I believe the market will put a value on the business that makes sense.

The current 6.7x EBITDA valuation does not incorporate the company's secular tailwinds and its ability to penetrate already fast-growing markets.

Moreover, balance sheet health is improving rapidly thanks to more liquidity, a decline in net debt, and improving EBITDA.

Long story short, XPO is well-positioned to become one of the best performers in its industry, which will more than likely result in tremendous investor returns. However, please be aware of economic headwinds and related volatility.

Once investors take that into account, all there's to it is waiting and letting XPO do the work.

Let me know in the comments!