San Antonio migrant smugglers put powdered chicken bouillon on the floor of the truck to throw off dogs at security checkpoints, survivor says 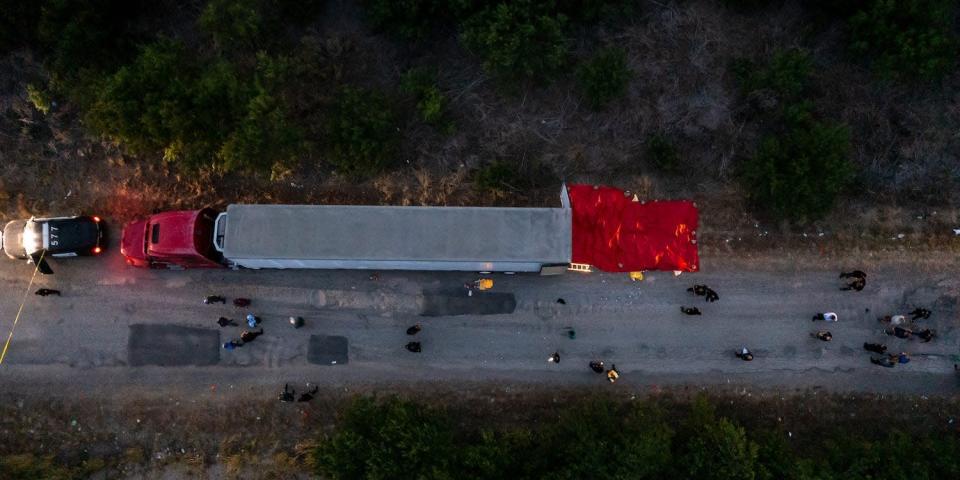 Smugglers put powdered chicken bouillon on the floor of a truck filled with migrants to throw off the dogs at security checkpoints, a survivor told the Associated Press on Tuesday. At least 40 men and 13 women, believed to be migrants crossing into the US from Mexico, died after being abandoned in an overheated truck in a remote area of San Antonio, Texas, on June 27. Yenifer Yulisa Cardona Tomas, a 20-year-old woman from Guatemala City, told the AP that she was among a group of people who boarded the 18-wheeler truck on the Texas side of the US-Mexico border.

She told the AP the smugglers confiscated everyone's cellphones and covered the floor of the truck with what she thought was powdered chicken bouillon to throw off any dogs at checkpoints. Cardona Tomas said that it was already scorching hot when they boarded the truck and that she and a friend decided to sit closer to the door, where it would be cooler. She said the overcrowding and heat worsened as the truck continued its journey and made additional stops to pick up more migrants.

"The people were yelling, some cried," she told the AP. "Mostly women were calling for it to stop and to open the doors because it was hot, that they couldn't breathe." She added, "People asked for water, some had run out, others carried some." Cardona Tomas said that there was no way to keep track of time and that she eventually passed out.

The AP report said she was being treated at Methodist Hospital Metropolitan in San Antonio. She said her friend also survived. Authorities have identified the driver as 45-year-old Homero Zamorano Jr.

He was arrested and charged with alien smuggling resulting in death, the Department of Justice said. Another man who authorities said had been in contact with Zamorano was also charged in connection with the incident. Officials said surveillance cameras captured the driver driving the truck through a security checkpoint with no issues earlier on June 27.

Read the original article on Insider